Can Your Diet Impact Your Risk for Alzheimer’s Disease?

In recognition of Alzheimer's and Brain Awareness Month we will examine the impact of controllable lifestyle habits such as diet, exercise and cognitive/social stimulation on your risk for Alzheimer’s disease later in life.

Alzheimer's is a progressive disease where brain cells degenerate and die, which destroys memory and other important mental functions. As more and more brain cells die, it leads to significant brain shrinkage.

Initially, one may notice mild confusion and difficulty remembering small things – but over time they may even forget important people in their lives, how to cook, get dressed, or clean and undergo significant personality changes.

There is still no known cure for the disease - so it is important to understand how to lower your risk from such a sad and destructive ailment. Scientists believe the disease is caused by a combination of genetic, lifestyle and environmental factors that affect the brain over time. 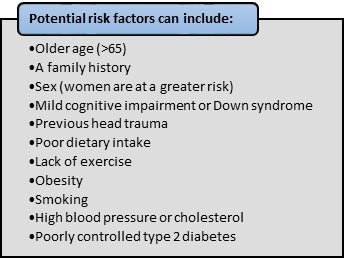 Essentially, most indicators of heart or metabolic disease that have a negative impact on the vascular/nervous systems seem to be associated with an increased risk for Alzheimer’s. This indicates a close connection between cardio-metabolic and neurodegenerative disease.

In the following, we will take a deeper look at the potential impact of dietary measures on Alzheimer’s risk. Research suggests eating certain foods may help keep the brain healthy, while others are detrimental to cognitive health. A diet rich in fruits, vegetables, and whole grains that is also low in poor-quality fat and added sugar can reduce the risk of many chronic diseases, including those which impact the brain.

Scientists have examined many aspects of dietary intake, and the following suggestions from a literature review, including a summary publication from the journal Neurobiology of Aging, may help point individuals in the right direction for reducing their risk for Alzheimer’s disease and boosting their brain health.

Note that much of the science concerning nutrient intake and Alzheimer’s is not yet fully conclusive or understood, but some elements of dietary intake seem to increase one’s risk more than others.

So, as one can see there are various dietary elements to consider, but there is clearly no one magic food a person can eat to directly lower their risk for Alzheimer’s.

In a subsequent Alzheimer's and Brain Awareness Month discussion we will address research on the physical and cognitive activity side of the equation for protecting one’s brain from dementia and Alzheimer’s disease.

Ryan Singleton
Excellent article! I'm wondering if you're familiar with any research that suggests strength training has a positive effect on other mental health diagnoses, such as mood disorders, schizophrenia, or anxiety? In addition to personal training, I work in the field of mental health and believe there are many positive mental health benefits to strength training--especial given strength training's improvement to the neuromuscular system, as you highlight here--but I'm having trouble finding studies/evidence to back my hunch. Can you speak to this at all? Thanks and keep up the great work!