Can Physical and Mental Training Prevent or Treat Alzheimer’s Disease?

In recognition of Alzheimer’s and Brain Awareness Month we are investigating the different lifestyle factors that can have a positive impact on your brain health and relative risk for dementia or Alzheimer’s disease (AD) later in life. Previously discussed are various dietary factors that may have an impact on one’s risk, summarized below. 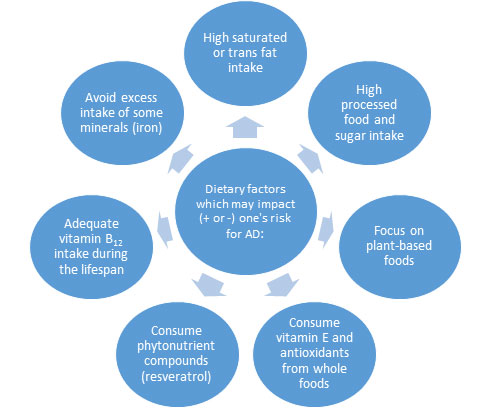 In the current discussion, we will turn our focus to the potential positive impact of exercise and cognitive training on AD prevention and treatment. One may be quick to wonder – how can physically training the body via aerobic and resistance exercise have a positive impact on diseases that directly impact the brain?

Remember, the neuromuscular system regulating movements during physical activity is simply an extension of the brain - via the spinal cord. Furthermore, aerobic and resistance exercise will help combat major risk factors associated with AD and vascular dementia (caused by damaged blood vessels in the brain) such as cardiovascular disease, obesity, high blood pressure, high cholesterol and insulin resistance.

Essentially metabolic, endocrine and nervous system degradation has a direct impact on brain health and risk for related disease later in life. All physiological systems are connected and influence one another.

Regular exercise is an important part of a healthy lifestyle for everyone, and those with AD are no exception. Significant research has shown positive impacts of weightlifting and cardio on brain health and reducing the likelihood of cognitive impairment. Epidemiological, and some intervention studies suggest that exercise may also play a preventative role in reducing the risk for AD – but unfortunately, little research shows exercise to promote any regression of the disease.

Appropriate activities can help improve mood, maintain joint health, maintain neuromuscular and cardiovascular fitness, promote more restful sleep and even prevent digestive issues such as constipation among those with AD.

Recreational fitness centers are well-suited to help those at risk for, or dealing with, dementia or Alzheimer’s to improve their quality of life. Group exercise classes might be especially beneficial, as they involve social-cognitive interaction with healthy movement (combined physical and mental training).

So What Does the Research Say?

It seems clear that exercise may help delay or slow cognitive decline in older adults. Animal studies have shown aerobic exercise to increase both the number of small blood vessels linked to the brain and the number of connections between cerebral nerve cells. In another study, researchers found exercise to raise nerve growth factor activity in an area of the brain linked to memory and learning.

Researchers have also found exercise to stimulate the brain’s ability to maintain old network connections as well as make new ones. In one investigation, older adults who engaged in an aerobic exercise program showed improved connectivity in the part of the brain engaged in daydreaming, executive function and planning.

Ongoing studies by the National Institute on Aging (NIA) are examining whether exercise can delay the development of AD in people with mild cognitive impairment (MCI) or Down syndrome.

Interestingly, one study published in the journal Frontiers in Aging Neuroscience found benefits for people who are already suffering from AD. It showed cardiorespiratory fitness training to be associated with reduced hippocampal atrophy among elders at genetic risk for AD (but not those without genetic risk).Per a review of available data, which certainly does not suggest there is a “magic bullet” activity to prevent or treat AD, those who wish to limit their risk should engage in the following:

For those suffering from dementia or AD it may be possible that some benefit more from exercise than others - depending on their age, fitness level, cognitive health, and severity/type of diagnosis. In any case one should not be discouraged from being physically active – embracing exercise as a preventative or treatment measure is really a no-brainer.

What About Mental/Cognitive Training?

Staying mentally active throughout life is associated with a lower risk of AD, but the research is still undecided on the potential for structured cognitive training to be used as a viable treatment for morphological changes to the brain or the partial remission of symptoms. In any case, mentally-stimulating activities such as reading books, taking classes, attending social events and playing games (there is now a full market for “brain training” games) are linked to keeping the mind sharp.

One older but large observational study by the NIA examined the impact of activities such as listening to the radio, reading newspapers, playing puzzle games, and visiting museums with 700 subjects. After a four-year period, the risk of developing AD was found to be about 47% lower for the subjects who performed stimulating activities the most versus those who performed them the least. Various other studies by the NIA and other organizations point to the potential benefit of continual mental stimulation and cognitive training to maintain cognitive integrity later in life.

Research seems to strongly suggest engaging in novel activities or learning something new as the best bet for combatting the potential for dementia. Interestingly, recent research has shown that having a lower level of education is associated with a higher risk of dementia.

So, even considering the research-based associations, one may be left wondering – how does simply keeping the brain active help prevent AD?

The reasons for the apparent link between social engagement or intellectual stimulation and relative risk are not completely clear, but scientists offer the following theories:

It is clear physical activity, a mentally-stimulating lifestyle, getting enough sleep and proper dietary choices can all have an impact on brain health and one’s risk for AD. It may not be quite as simple as the old adage, “if you don’t use it you lose it” - but there appears to be some truth related to the concept. Brain health is linked to cardio-metabolic-neuromuscular health – which obviously makes sense considering it is the central processor for neuromuscular function, relies on an efficient cardiovascular function for nutrient delivery and waste elimination, and stands as one of the most metabolically-active organs in the body.

Altafaouq Alelmi
Established in 2004, Al Tafaouq Al Elmi, is a training and consulting provider based in Abu Dhabi. We are licensed by The Abu Dhabi Centre for Technical and Vocational Education and Training; and one of the preferred training partners by the Federal Authority for Government Human Resources.