Boosting that Back Function – 4 Stance Variations for the Good Morning

The good morning exercise is excellent for developing core strength, hip extensor flexibility, and function synchronicity between the hips and trunk. It is favorable for enhancing the posterior kinetic chain as the movement requires cooperative force couples action across multiple joint segments. It is preferred for erector spinae development over back extension machines as the posterior chain work is closed-chain. The mechanics of the exercise require significant work from the erector spinae, gluteus maximus and hamstrings when full range of motion (ROM) is performed. The long resistance arm at the end-point of the eccentric phase tells the trainer that significant loading will not be needed or even useful/safe for most clients. Considering the flexibility and coordination requirements, trainers must make sure the client has the ROM, trunk stability, and lumbo-pelvic rhythm to maintain proper form. The traditional good morning exercise usually involves axial loading with a barbell, but many modifications can be employed (e.g., reaching a stability ball overhead or a medicine ball against the chest).

When a bar is used, it should run across the ridge the trapezius in line with the spine of the scapulae. In the starting position, the client maintains an upright posture with the feet shoulder-width apart and the spine and pelvis in neutral positions. The knees should also be set in a slightly flexed (10-15°) position at the start and maintained during the whole movement. The action starts by flexing at the hip moving the pelvis posteriorly to allow the torso to descend forward and downward toward the floor. The back is flat, the pelvis is neutral relative to the lower back. To ensure the back does not round during the eccentric component, the client should be instructed to keep the chest up and the scapulae retracted; and to descend only to a ROM where a flat back can be maintained. Optimally, this is 90° of hip flexion with the back parallel to the floor. Once functional ROM is obtained the client extends the hips to return to the start position.

The most common errors observed include additional flexing of the knees due to tight hamstrings or rounding of the back commonly due to poor instruction or trunk weakness. Rounding of the back is very dangerous as it places excessive compressive forces on the intervertebral discs and associated connective tissues. If performed correctly, clients with tightness who are prone to hamstring-related injuries may benefit from the lengthening properties of the movement (the split stance variation in particular) with appropriate loading. It also allows for the development of functional eccentric strength (proper deceleration) that can aid in pelvic stability. Many variations of the good morning exercise can be implemented – the ones addressed below revolve around modifying the stance. Try using the split and unilateral stances once the client has mastery of the narrow and wide stances through a full ROM.

Wide Stance Good Morning - The gluteus maximus provides greater contribution to force production as the hips open up earlier during the concentric phase. The adductors also contribute to a greater degree due to the abducted hip position. This technique can be used as a modification for clients with tight hamstrings. 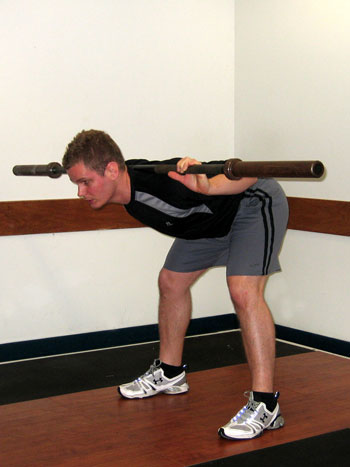 Narrow Stance Good Morning – Compared with the wide stance, the erector spinae experiences a greater relative challenge as the load is placed upon a longer resistance arm and the hips open up later during the concentric phase. There is also a greater relative flexibility demand placed on hamstrings when in a narrow stance vs. a wide stance. 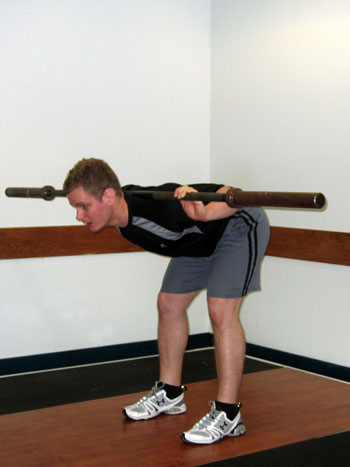 Split Stance Good Morning – This stance will incorporate a greater balance and hip/lower back stability challenge. The leading leg is positioned slightly out in front of the torso at the start position; resulting in a significantly greater flexibility demand and eccentric stretch. Keep an eye on the pelvis as compensatory actions can twist the body. With low loading, it can be an optimal component of a dynamic stretching routine or warm-up. 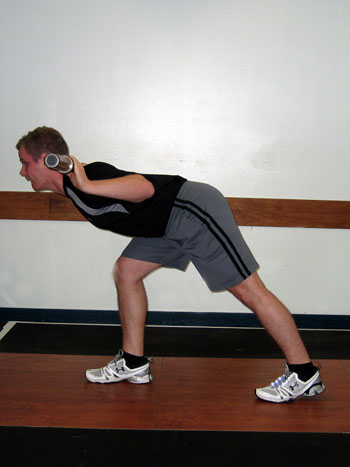 Single Leg Good Morning – This one can be quite challenging due to the small base of support; stabilization, balance, and flexibility demands are all elevated. A slight knee bend in the supporting leg is maintained, while the trailing leg extended behind the body is driven as straight as possible. If possible, the torso and trailing leg are in a straight line and parallel to the ground at full ROM. This variation also stretches the gastrocnemius as an added benefit. Watch out for lateral rotation of the pelvis as the body attempts to place more load over the base of support.